Choosing (How To Avoid) Your Poison

President Obama has signed into law a regulation involving ecigarette juice, to protect young children from hazard. As many of you may recall, I support ecigarette regulation that makes the product safer without impeding the industry that helped me quit smoking, though I am suspicious of regulation for the sake of regulation, based on undemonstrated and/or unrealistic fears, and for the sake of “getting tough on big tobacco.” I fear we’re headed more in the direction of the latter than the former, but time will tell.

I believe in the greater hierarchy of things to be feared by consumer products, much of the concern around ejuice poisoning is not especially justified. People don’t seem to understand how incredibly awful the stuff tastes. I don’t mean it tastes a bit unpleasant, like sour or something. We’re talking about a level of pleasantness somewhere between soap and gasoline. The nicotine actually stings the tongue. I’m not saying that no child anywhere would ever do this, but it is not the attractive nuisance that people are lead to believe.

That being said, I support regulation to address this. It may not be the hazard some are making it out to be, but it seems to me to be a hazard that can be avoided with relatively minimal negative impact on the producers and the product. The regulation that passed, however, may make things worse rather than better. 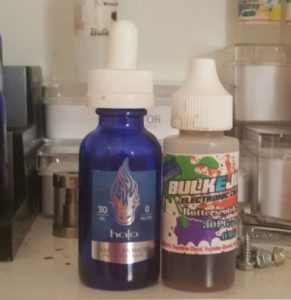 I get my ejuice from three sources: Halo, Bulk E-Juice, and Totally Wicked. You can see the Halo bottles to the left, and Bulk to the right. The Halo bottle has a child-proof cap that Lain would not be able to easily open. She would have to know to push it down and twist it, which is probably enough to satisfy the safety standards. In order to get the juice into the device, it has a dripper underneath. For Bulk, the lid comes off by simply twisting it, and has a squirter below to get the juice into the device. Lain would be able to get the cap off without any problem whatsoever. Totally Wicked has a child-proof cap (you have to squeeze the sides and twist) and a squirter.

While the regulation targets the Bulk containers, I am far more worried about something happening in the Halo bottle than the Bulk. Underneath the lid, the Halo bottle is completely open. Once she gets into the Halo bottle, she could just chug-a-lug it before realizing exactly how awful it tastes. A week ago I would have keep skeptical of her ability to get into the bottle, but parenthood is a series of revelations on what the little ones can’t and then suddenly can do. For the Bulk bottle, she would have to squirt it in her mouth, which I’m not sure she has the strength to do. And if she did, I suspect she would immediately discover that it really tastes awful and she would move on. She could decide to keep going, but there are 100 things in this house she could decide to ingest that worry me more. In order to chug the Bulk juice, she would have to get the squirter off, which I myself can’t do without a thin instrument like a butter knife. So, I’m not worried about the Bulk and kind of worried about Halo. 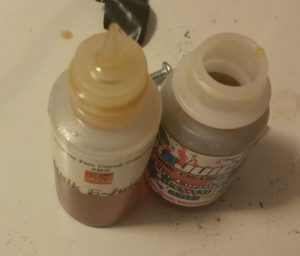 In preparation for the law, I suppose, Bulk seems to be offering alternative packaging for their juice. I ordered some yesterday and will report the results, but it looks like they’re moving towards Halo-like bottles (it’s described as “child-proof cap with dripper”). Which means that it will be trading less safe (to my eye) packaging for more safe packaging. Which might make this reglation a net hazard instead of a net benefit. It’s hard to say.

What would have been ideal is to require both child-proof capping and a squirt insertion system (or something similar). This is what Totally Wicked does, and it is by far the product that I am least worried about.

The latest violence in the never ending Israeli-Palestinian conflict is at its highest pitch in some time, while the world calls for a cease fire that seems far away.

RAW FOOTAGE: This is the moment the Iron Dome intercepted a barrage of rockets over Tel Aviv and central Israel. pic.twitter.com/8jl8OTgWCl

Welp...so much for that plan. A Federal judge has blocked the NRA's bankruptcy filing "not in good faith."

The city will spend $105 million to build a new NYPD precinct in Southeast Queens, Mayor Bill de Blasio announced Tuesday — reversing a decision to eliminate the project last year when he was under pressure to cut the police budget.

De Blasio said stimulus funding from the federal government will allow the city to move forward with the plan to create a 116th precinct.

As protesters took to the streets last year after the death of George Floyd — many pushing to defund the police — de Blasio promised in June to cut $1 billion from the NYPD operating budget and another $500 million from its capital budget. Very few of the proposed cuts have actually materialized.

One major rollback was the planned new precinct, whose budget de Blasio said would instead go to build a community center in Roy Wilkins Park in St. Albans.

With the Covid vaccine numbers going up, and unused doses starting to become an issue, questions are being asked of the Biden Administration

In a move sure to play right into the "Big Tech" debate, former President Donald Trump will remain blocked from Facebook

From the New York Times:

Republicans and Democrats are increasingly alienated from each other, rhetorically and geographically.
How did we end up with such a segregated political landscape?

Visit the link and give your address and it will tell you whether you live in a neighborhood with neighbors overwhelmingly registered to one political party or not.

(Featured Image and example image is a screenshot of Jaybird's Political Bubble.)

A 4.5 mile stretch of Line 5 under the Great Lakes is at the center of a legal fight with Michigan Governor Gretchen Whitmer.

And now, for something completely different...to toast, or not to toast? And at what price? Let us find out through the magic of YouTube...

While we await the announcement of the GOP's State of the Union response giver, here is the Democratic response in 1985

Where did you rent your movies?

There is nothing about this that isn't just gloriously American sport: The Ballad of the Ginger Assassin and the 7-10 Split

Numbers are Beautiful.
Therefore, Computers can be Improved.

Humphrey explains to Bernard the perils of regional government.

All should be well. Please report any problems you might see.