Pre-peeled Oranges and Owning Your Ignorance

If only nature would find a way to cover these oranges so we didn't need to waste so much plastic on them. pic.twitter.com/00YECaHB4D

One professed reason for opposing pre-peeled oranges was that they were environmentally unfriendly. By removing the peel and putting it into a container, Whole Foods is duplicating effort that nature already put in to make the peel in the first place.

Grocery stores, however, sell lots of things in packages.The only stuff not sold in packages are the fruits and vegetables, and even these are often put into plastic bags offered free with purchase. My wife often tries to buy them without bags only to have cashiers grumble with annoyance at having to handle four individual apples instead of a single bag.

If you open a package of food, you will often find more packages. Candies come individually wrapped within a larger bag. Cookies and crackers are packaged in sleeves within a larger box. Bottles of all types are often stylized to look interesting rather than maximize the volume of product they contain. In fact, manufacturers often reduce the amount of product within a package while maintaining its overall size (and therefore price) as a way to increase margins.

Marks says consumers rarely notice things like the tapering of ice cream containers, cereal boxes that get thinner, or jars that now have concave bottoms.

The only thing that comes to mind that truly embraces a utilitarian ethos within the typical grocery store are bags of flour. And even those are often smaller than they need to be and thus wasteful.

But to my knowledge, no one complains about individually wrapped candies, even though we might be better off if they were done away with altogether. Oranges are healthier than 90% of what else is in the grocery store, and at least in my household, the peel is indeed a barrier to eating them.

This leads me to think it’s not the packaging itself. It’s the principle of the thing. The picture was an invitation to join in on some get-off-my-lawn smugness that isn’t even available to those complaining about bottled water. You don’t have to care about the environment to mock pre-peeled oranges. You can just feel smug about how lazy people are.

But then, someone pointed out that pre-peeled oranges are actually quite useful for those who have disabilities or arthritis. It boggles my mind that this was a surprise to anyone, but it was. And if satisfaction felt by being outraged by something on Twitter is topped by anything, it is by being able to say, “well, actually” in reply.

My thesis, however, isn’t that this is just another example of the outrage/reverse-outrage cycle, though it is that. Rather, it’s an example of the treachorous pitfalls of opinion-having. Thousands of people who had never thought about very much about oranges decided that seeing a picture of a peeled one in a plastic container was sufficient information for them each to have very strident, judgmental opinions on the subject. There’s no invitation within the Twitter app to find more about oranges. The path that is paved most smoothly is the invitation to retweet. Even replies are comparatively burdensome. 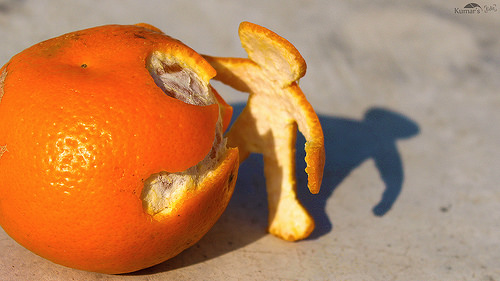 The problems are narcissism, incuriousness, uncharitability, and arrogance. If I cannot instantly deduce the reason for pre-peeled oranges, then corporations and consumers have erred alike. If I cannot guess at the purpose of something, I will accept the purpose suggested to me. Additionally, I will assume it is the laziness and greed of others. And any assault on my judgment must be defended, however silly it makes me seem after the fact.

When I peruse my own record here, I can’t help but notice my most deeply embarrassing posts stem from that same narcissism. Narcissism is what has permitted me to have an opinion without having done sufficient research.

Luckily, I’m learning. When I saw the pre-peeled oranges, I thought “I dunno, maybe that makes sense to someone” and moved on. This is not due to any special intelligence. My reaction could be taken as a copout — an unwillingness to take a stand.

At least in this case, however, that unwillingness served me well. I was humble about my own knowledge of oranges and peels and why people might like pre-peeled oranges. And the result was that I didn’t unconsciously promote ableism. Maybe the problem isn’t outrage addiction after all.

Vikram Bath is the pseudonym of a former business school professor living in the United States with his wife, daughter, and dog. (Dog pictured.) His current interests include amateur philosophy of science, business, and economics. Tweet at him at @vikrambath1.

Cassidy Hutchinson, a former aide to Donald Trump, is detailing what she witnessed during the Capitol attack at the Jan. 6 hearing, including the former president trying to steer his limo to the Capitol.